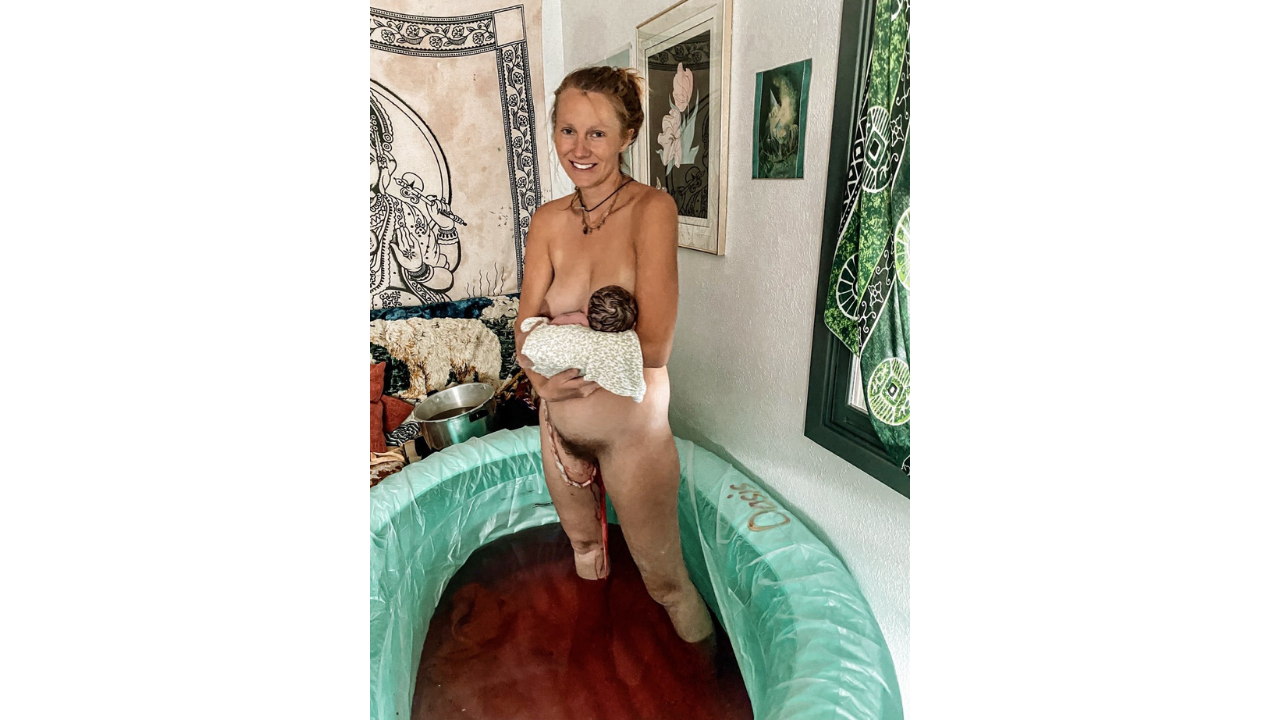 I met my partner (now husband), Sebastian, a little over a year ago in the middle of the Australian outback at a hellish watermelon farm. Sebastian moved into the donga next to me. I had been offering massage to my fellow co-workers, Sebastian inquired, and after a mind blowing conversation after his massage we became inseparable.

We had both worked for this farm for over a year, and it became increasingly dire that we leave and become serious about our true desires to heal the earth and not harm it. Through some friends we met a sweet Vietnamese woman who had a food forest in the same town, we quit our jobs and moved in with her where we began to volunteer our time in exchange for meals, rent, and her expertise in regenerative gardening. It was in her wee little paradise that I became unexpectadly pregnant.

We wanted desperately to stay in Australia, where we had both grown our sense of home, but after a grueling decision making process, we are now in New Mexico, USA. We are staying with my father, working on the family “farm”, rearing an organic garden where we produce 2 acres of fresh veggies that we distribute to our community through farmers markets.

From the very beginning of my pregnancy, I knew I wanted a home birth. No one I personally knew had ever had one, but I had followed @freebirthsociety for years, and my keen intuition was guiding me in that direction. I have always been an independent and free spirit often falling into what some might call “the counter culture.”

Whilst in Australia, I had considered birthing through the system when I had heard that our local hospital provided a home-birth option. I began the process to become a patient aiming for a home birth, I liked the idea of having a midwife present.

As I began jumping through all the hoops that the hospital required, I realized the appointments were humiliating as I was treated as a dysfunctional cow to be herded through. I was paying for private insurance as a tourist, so every doctors visit was costing me over $1000 out of pocket. I had done some blood work as a requirement to become a hospital patient, I found out I was RH negative blood type. On my first appointment in the hospital, they told me I would need to get my blood work done again (though I had just done it less than a week prior), but this time they wanted it done within the hospital, and that they strongly suggested the Rogram shot for my blood type. I left this appointment feeling completely overwhelmed with all the BS they were already putting me through. They also ordered that I do a preeclampsia test. When I was described the process of this procedure, I realized that birthing within the system would be detrimental to my mental and physical health.

That is the exact moment I decided fully that I was wild and freebirthing.

We flew to the USA at 27 weeks pregnant in April of 2021. Once we settled onto the farm I could begin nesting and deep diving into preparing for birth and baby. I knew that my decision to freebirth would be looked down upon by family and most friends, so I mostly kept my decision private. But living with my father It was inevitable that we discussed it. I remember after discussing with him my decision, he said, “I wouldn’t go around telling people you’re planning a home birth, someone my report you to cps.” I was completely flabbergasted at just how uneducated he and many were about a womens rights to their body. So Sebastian and I made it a point after that to roar our truth to those who confronted us about it, we were very confident in our decision, and very protective of it. I think the outrage that brewed within me honestly fueled my fire as I was preparing to birth.

At 2am, July 21st, I woke up to deep cramping in my lower abdominal area. I woke my partner and let him know birth was going to happen today. I went back to sleep for a few hours. At 5am we took a walk through the garden. I remember being in aw as the first gaggle of geese of the season flew overhead. We walked in the veggie fields as the sun rose. I vomited about 3 times in the garden. As I walked I would kick my legs back, this was completely instinctual and seemed to relieve some pressure in-between sensations. We went back into the house, I had a shower as Sebastian prepared the birth pool in our room. I entered the birth pool around 9am, where I contracted for about 2 hours, napping in between some sensations. My contractions were slowing down. I got out of the pool and labored while standing for about an hour. I wrapped my arms around Sebastians neck and squatted down, pulling on him as my sensations surged. We got a bucket of cold water, so I could cool my face inbetween sensations. I continued vomiting.

Around 1pm, I was back in the pool. A friend of mine had sent us a birth playlist prior, I found a lot of peace in the music, and reminded myself to breathe through everything as I could feel time condensing. I labored mostly in frog pose, hanging over the side of the pool in-between sensations. I could feel my pelvis expanding. At some point I put my fingers up into my yoni to see if I could feel anything. About 3 inches up, I could feel something hard, and I knew birth was close.

My water never broke. I remember thinking, I totally understand why a woman would opt to be numbed in this moment. I never had any doubts of myself as birth came closer. I felt as present as I ever have in my life. I felt the urge to push come, I could feel my sensations transitioning into something different. I could feel his head coming closer. I could understand why some women have described birth as orgasmic, there was something slightly sexual about the sensations as they became deeper, I was growling/grunting deeply, surprised at my own noises in the beginning, I found so much release in making noise.

I was coming up on a burning sensation (ring of fire). I reminded myself to breathe so deeply through this process, I really felt in communication with my yoni, asking her to expand.

His head began peaking out, and for the next 6-10 sensations it would peak out and move back within. I moved into a kneeling squat, where I bore down heavily, and then I moved onto my back. It was at this glorious point when Sebastian in a very calming voice began speaking to our son in Italian, I don’t speak Italian but I could understand he was guiding our baby out.

Surya’s head gently popped out. I watched it slightly turn, and with another breath his little body was born. He looked just like a little water angel with his arms and legs out wide under water. I picked up his slimy little body and held him close. Sebastian stood behind me, and Surya looked right up at me and then to him, he was so peaceful and calm. He cried really just a tiny bit to clear his airways, and he was back to calm. Sebastian and I just looked at each other and cried joyously.

I remember leaning back on the pool and seeing a little blob of vernix above my shoulder, I instructed Sebastian to put it in a tin so we could use it later (I used it on my nipples for the next week). Surya latched about 5 minutes after birth. Time completely flew over the next hour, I stayed in the pool and continued contracting.

About an hour and a half later, I knew the placenta would soon be ready. I exited the pool and kneeled onto my bed, Sebastian placed a bowl beneath me. Birthing the placenta was truly the most wonderful sensation. It felt so warm and comforting to feel it come through my yoni. We spent the next hours googling over Surya and crying joyously, we soon rinsed the placenta off and then dressed it in salt and herbs. We left the placenta attached for the next 3 days, until the cord became very hard, we were worried how it was beginning to pull on his belly, so we cut it down to a little stub, the stub fell off 2 days later.

We had intended on recording my birth. We were able to record footage from before and moments after birthing. Our memory card had become full, so Surya’s exit remains private and burned in my memory. That is my birth story. Again, I felt so grateful to have found Free Birth Society years before, seeing videos of free birth occasionally on my instagram feed totally normalized birth for me over the years.

We have been able to transition into parenthood so comfortably. I read the other day from Yolande Norris-Clark, “Birth-work is death-work. Because birth is death.” This struck me. I never knew I would encounter so much work with death as I came toward birth. Of course a death of self. And re-birth of self. But then I was further confronted, as family and friends around bombarded me with their personal fear of death, I had to make amends with death. I had to sit with myself in all my own fear and accept that death is inevitable. I had to say out loud to my partner, “This baby could die, and in that tragic and possible event, I will not take on shaming that may come from others, because I know that death is normal.” And by understanding this, with facing death, I believe I was able to birth fearlessly.