The [secretly planned] Unassisted Birth After Cesarean of baby L 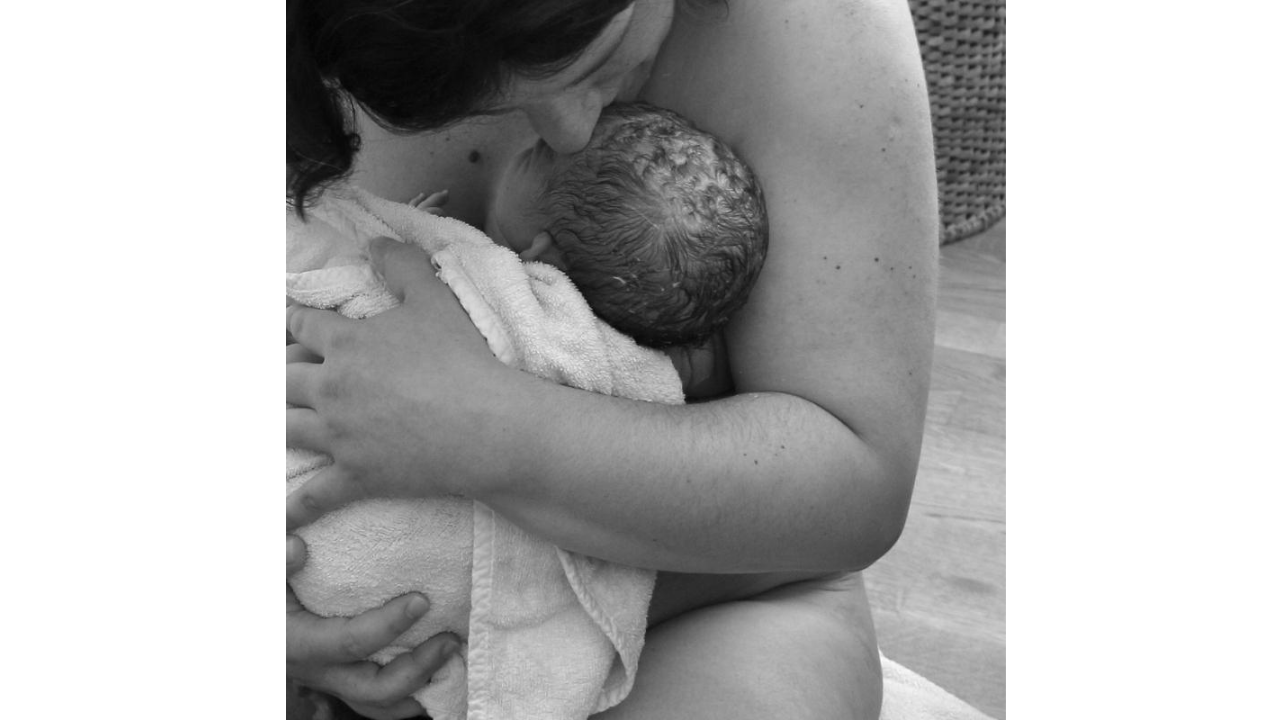 I went to bed on the 27th March 2018 with some mild, sporadic waves. I might have felt some during the night, or I dreamed, but could sleep anyway. When I woke up in the morning of the 28th, they were coming in steady intervals and I could not ignore them. I took milk with ghee and a bit coffee but didn't feel for breakfast. While G and the kids were eating, I installed myself in the bathtub where I remained for around 4h. I was mostly lying on my left side, under water. It provided me good relief. G came in sometimes and assisted me with juice, snacks and warm water when he could.

Our oldest came in and wanted to talk a bit as well, about the baby's arrival. At first I could still talk. Later, closer to 11.00 I didn't want to see nor talk with anyone. I waved away G some times when he walked in, accidentally in the middle of a stronger wave.

Somewhere before 12, I got fed up of the water. I felt and looked like a raisin and was kind of tired of not moving much. I moved to the room where E and I temporarily sleep. Almost at the same time, G had put the twins to sleep, helped E find an activity, and came to be by my side. At that time, I felt I didn't want to be with anyone else but him and felt I could finally relax (this was around 12:00). G got me some delicious warm chicken bone broth and after this point, the rhythm got fastly more intense. G was pressing my hips with each wave and it felt great. I was leaning forward, resting on the side of the bed, knees on the floor (not the greatest idea!). The twins woke up around 13, right about the time I started to feel my waves changing form. When G joined me again the fetal ejection reflex (FER) was almost installed. And then I did as I told him I would do: you know the "I can't do this" talk. My water broke, bloody show, and the head started to emerge, almost everything at the same time. During my first birth, FER was "kind" to me. I could take mini-naps in between urges. This time, I could barely catch some breath. Fast and furious was it, I had no control - and it was okay. I wanted to be one of those women who gently embrace FER and silently let the baby out.

During a fraction of second, I had the time to think to myself: who am I kidding, that's not me. I am loud, I scream. So I did, without shame. I was holding the head with my right hand, but then I felt I couldn't hold it anymore, I needed my hand to hold myself to the bed. It felt like I was violently vomiting over and over, non-stop. I felt some release, G told me the whole head was out, I started to feel another "vomit" building up and just told G: catch the baby - and baby L flew out into his hands, around 13:23, and cried the next second. Our oldest came into the room right away and was thrilled!

Baby latched soon after and nursed for quite a while. I think I felt the detachment of the placenta, because at some point some more blood came out  - but not the placenta itself. I got tired of waiting for it (maybe 1,5h?) so we all moved to bathtub where I squatted, blew into my closed fist and out the placenta came into a bowl. G took the baby and the bowl so I could wash myself. Then we moved to the living room. More nursing, more skin to skin. Lotus birth didn't feel appealing anymore so we cut the cord and shortly after I got my first placenta smoothie from G.

Sometime after, we took a relaxed selfie, high in baby smell and empowered. WE DID IT!! I felt (and feel) so thankful and proud of us as a team! The other children were playing and life just resumed itself, naturally.

We got our revenge. The day baby L was born, we too were (re)born as mother and father, right from the ashes of our previous (traumatic) experience. Thank you, L., for choosing us and giving us this opportunity! We are whole again.