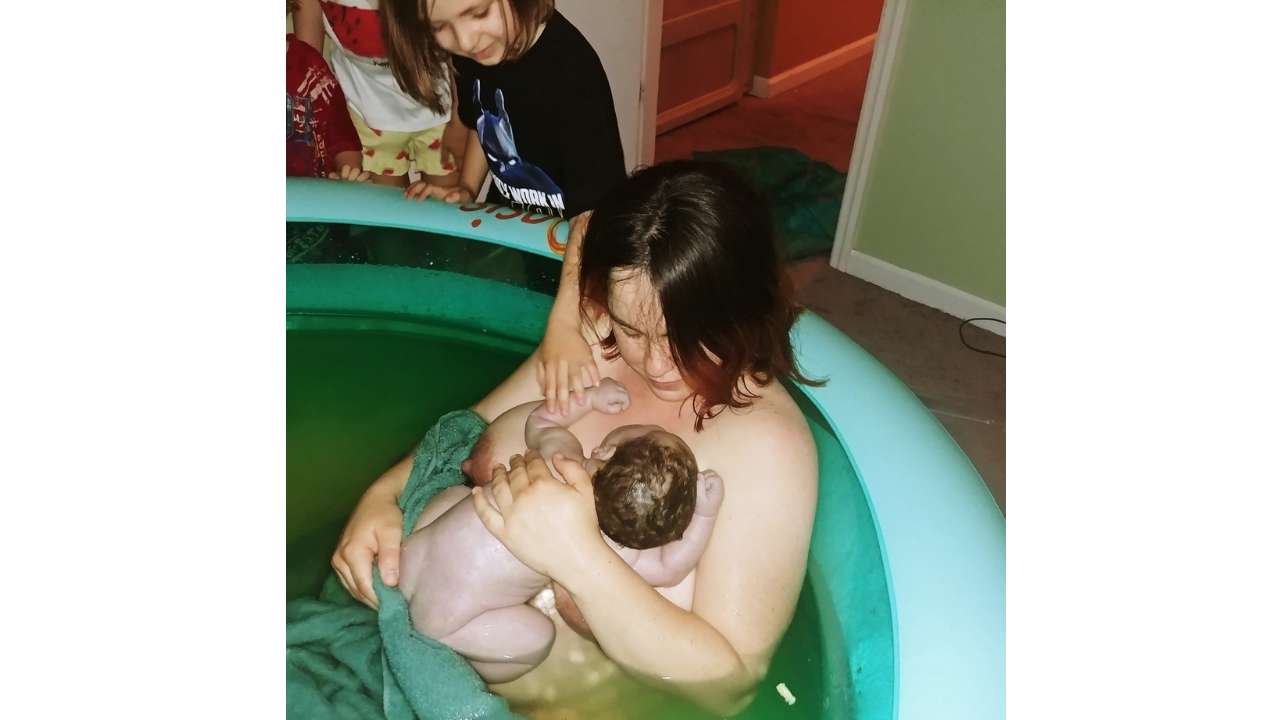 I was 41+1 weeks pregnant Friday, May 25, 2018. That afternoon I had taken a nap with my toddler, and my husband came to lay and chat when he got home for work. I was telling him how I was feeling emotional at seeing all the babies born the past few days and getting anxious to meet our 4th little one. He was being reassuring as usual and feeling my belly. He thought the baby felt fairly low, a noticeable difference from a day or so before. As he was feeling around, the baby moved in an odd way and I felt a large sharp pinching sensation. I joked that the baby was trying to pinch him and to leave my belly be. We got up and decided it we should go get some dinner as it was 6:30 already.

At the restaurant, the pinching feeling continued. I noticed that I wasn’t having my usual evening practice tightenings, but instead the pinching feeling would come and go. It was rather uncomfortable, and not like anything I had felt before, and definitely not like contractions. I mentioned that the baby was still pinching me, and my husband asked if I wanted to leave. I said no, I was fine, it was just odd. We finished, and as we left I sent my best friends a message to our group chat around 9pm saying that something was different, these pinching sensations were fairly consistent, and I hoped that meant I would get a baby over the weekend. But as we arrived home, the pinching went away and was replaced by deep pressure, that I recognized as contractions. At 9:34 I messaged back saying that actually I think I might be in labor.

I told my husband that I was thinking this was it for sure. He picked up the floor and took out the trash. I organized the supplies on a table in my birth room. He started filling the pool. At 10pm I was standing and talking to him about how I think this will end up being a fast birth, although nothing felt intense yet, the waves were happening often. As I said this my water started leaking. I laughed and said, “Well there starts my water.” I couldn’t believe it, as in the past water breaking usually meant transition and baby around the corner, but here I was easily setting things up only having to stop to take a few breaths with my eyes closed during the waves. I went to the room and changed into a short, comfortable dress. The other kids noticed the pool, and my toddler excitedly yelled “Pool! Baby coming Mama?” I told them that it was baby time, but we didn’t know how long it would be so they might want to go watch a movie and we would call them in to see when it was time. I snapped a quick picture with my bigger two kids and they went off.

I felt a more intense wave and decided I should go to the bathroom before hopping into the pool. I had two contractions on the toilet, and that was not a comfortable position for me. I made my way back to the room and was feeling hot, so I was excited to see that hubby set up a fan for me. I turned on a beautiful cello artists music and decided that although it was early, I wanted to try the water.

I had a couple contractions that seemed as if they were very close together. I could feel baby moving down inside me, which was such a strange wonderful feeling. I was not afraid or overwhelmed. I felt so connected to my body and my baby. The contractions were one on top of another at this point, but I never had that “I can’t do this, it is too hard” feeling like in previous labors. I just felt like I was on top of it all. It wasn’t a choice I was making, I just was there. The waves were intense, the work was getting hard, but it felt so meaningful. I felt grateful for it. I just low moaned my noises and rubbed my hands on the towel near me. I felt a contraction that had a pushy feeling at the end. I told my husband, “I think I am feeling pushy.” The next contraction the fetal ejection reflex started, and I felt my body began working to get my baby out.

In between the waves I said, “If the kids want to see, tell them because it is happening”. I heard them come into the room. They were so excited. I could hear my toddler saying “baby is coming one minute”, and my 5 year old was excitedly asking questions as his Papa was trying to get him to settle down. My 8-year-old was quietly watching. She had decided last minute to watch. I had a couple more very intense waves with my body bearing down forcefully. I felt the strong sting of the ring of fire, which is the only part of the entire experience that felt overwhelming. I knew my baby was coming soon. I felt excited that I would be meeting him or her shortly. I was focused. A few more contractions happened with my body pushing for me. I was on my knees leaning over the pool, so I couldn’t see. In my mind, I thought more of baby was out. I could feel baby moving and my Mama Bear instinct kicked in and I yelled “Nobody touch the baby” a few times. Hubby later told me that just the head was out, no one was near the baby. I realized that what I had felt was just the baby moving and my body working hard to turn those big shoulders we had joked about when I was pregnant. Another wave or two and my body pushed the shoulders out which felt like a second ring of fire. Baby was out into the water at 11:05 PM. I flipped over and held my sweet precious little one, who was so quiet with eyes shut. I didn’t worry for a second. I felt so connected to this baby as I looked and talked. Baby cried a bit and looked at me finally. I kissed the baby over and over. I looked down to see we had a boy! Another beautiful, 3rd boy. Without thinking, I yelled to my daughter who had begged for a sister, “It’s a boy Sissy, I’m sorry!” She told me she didn’t care and was so happy. I looked at my baby and just thanked him for being my partner. That is what the labor felt like, a partnership in which we worked together and communicated. I felt so at peace, so safe.

I got out of the pool about 10-15 minutes later and gave a big push and the placenta plopped into the bowl. We cut the cord around 2 hours later, nursed and snuggled, and then weighed and measured him. 10 lbs 21.25 inches long. What a big boy! I didn’t tear at all and am healing well.