The Freebirth of Hannah Jane Wooten 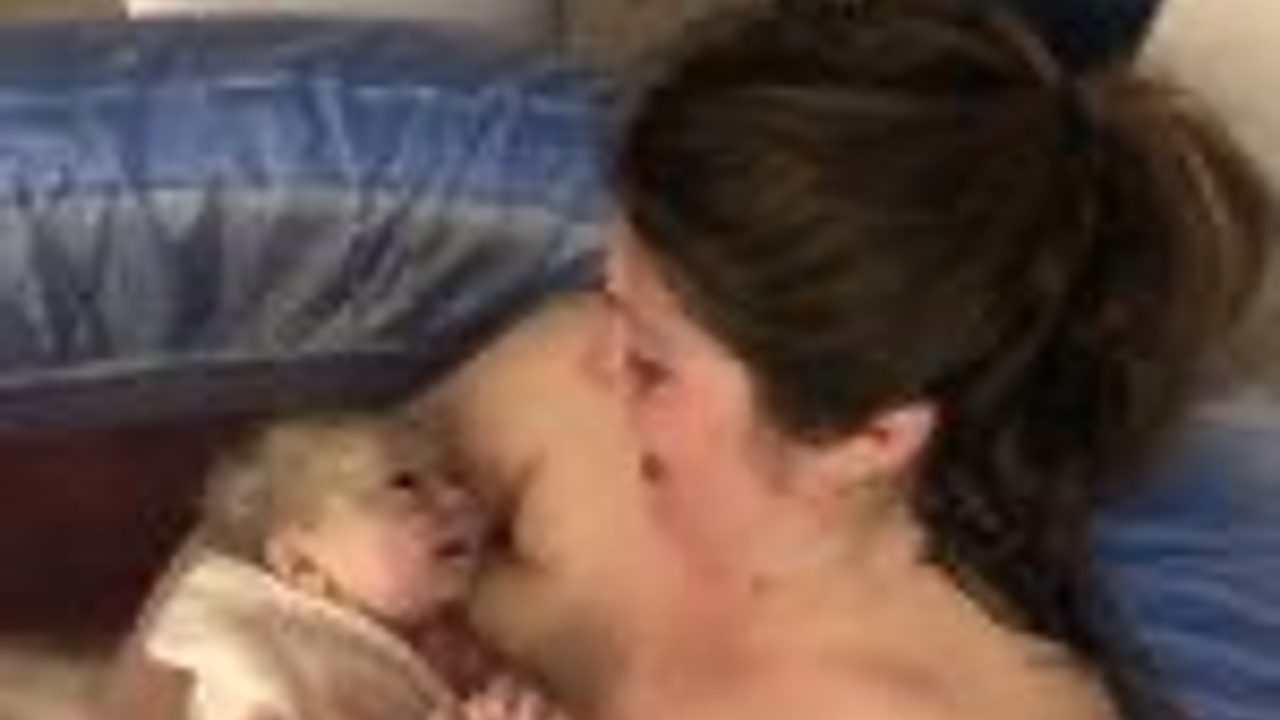 I went to bed Monday the 27th feeling a lot of period type cramps but was able to sleep easily. I woke up on Tuesday the 28th and had my first contraction at 8am. I canceled my chiropractor appointment and got ready for the day. I decided to run one more errand and ran to target. I had a few contractions while there but they were pretty easy to manage. They continued until about 2pm when the maintenance guy brought over our new dishwasher. At this point they had stopped completely. I decided to go for a walk and about half way through my contractions returned. They were easy to walk and talk through. Matt came home and we went on another walk at 6:30pm to see if they would pick up in intensity and they did.

When we got back home I made a quick dinner and tried to relax on the couch. The contractions were getting stronger and it wasn’t comfortable to sit or to watch tv any longer. I went upstairs to our room and labored alone in silence for a few hours. I would stand during a contraction because sitting didn’t feel right. At about 10pm we filled up the pool to see how the pool would feel. After 5 minutes my contractions pretty much stopped. I didn’t stay in much longer because I wanted things to continue. I labored alone until about midnight when I decided I should lay down to get some rest.

I was able to sleep between contractions for about 4 hours. When I woke I snuggled Abby (our dog) for a bit and labored in our room. Matt woke up around 6:30am and added more hot water to the pool so I could get in. I wasn’t in very long again because it slowed things down but the water was very comforting. At around 9am I made my way downstairs to try and get something to eat. I was feeling really hungry but wasn’t able to eat more then a few bites of oatmeal. I labored in the kitchen for a while. It felt so good to lay my body against the counter and sway my hips during a contraction. At this point I had been standing for almost every contraction and my legs and feet were too sore to keep standing so I headed back upstairs. Around 11 I had Matt fill up the pool with hot water again and got back in.

At 11:30 am my contractions started to feel different. They were more intense and I felt my body bear down. My contractions were about 2 1/2 minute apart and I really thought baby would be here soon. I was on my knees and had my upper body draped over the edge of the pool. During a contraction I would grab the towel in my fists and roar through the contraction. Abby would often come over and put her head next to mine or lick my hand. I labored this way until around 3pm. Matt and abbey would come up and check in with me, offering me water and seeing how I was feeling. He would ask me if I felt baby moving still and he would tell me he was sorry I was in so much pain. I reassured him it wasn’t painful at all just intense. I think the sounds I was making made him feel like I must be in pain. I got out of the pool at 3pm and decided id try and nap. After about 30 seconds a contraction hit and it was the only one I felt that was painful. After it passed it look every ounce of energy I had to get myself out of bed and into the pool. I made it through one more contraction and raced over to the pool. Not even 10 minutes had passed and I felt this increase in pressure. I opened my eyes and at the peak of the contraction I felt my water break. It felt amazing to have that pressure gone. I called for Matt to come up to tell him my waters opened. He was so funny saying “are you sure it broke? Your belly still looks so hard” I assured him I was positive it had broke and our baby must be close to being born. There was vernix floating around the pool and the water had cooled so I asked Matt if he would empty some water and replace it with hot water. I put a finger inside me to see if I could feel baby and I couldn’t.

I continued to labor in the pool. It was so crazy to feel my body bear down with each contraction without having to consciously push. When a contraction would hit it felt like I left my body and went somewhere else. I was so relaxed and in the zone that the hours passed quickly. Abby would come up to check on me and I’d have to ask Matt to bring her downstairs, she would pace and whimper. It was distracting and would take me out of my zone.

Around 6pm I put a finger inside me to see if I could feel baby and I finally could! I was so excited! I called for Matt and had him come up and be with me. He laid on the bed with Abby and we would chat between contractions. During a contraction I wanted it silent so I could be in the zone but once it passed I felt totally normal and okay having a conversation. My body continued to bear down and bring baby closer. This went on for hours.

At about 9pm, I checked myself again and felt what I thought was hair! Baby was so close to crowning, about only an inch inside me. The contractions were back to back. Only giving me about 30 seconds between to rest. My body would bear down and babies head would began to stretch me, then they would go back inside. After each contraction babies head would go less and less further inside of me. When babies head was at the widest point, I had a contraction and maybe 10 seconds to rest before the next one started. At the point babies head was staying out and not going back inside. The next contraction I felt pain and yelled out that it hurt. I told myself to breath and panted through the contraction. Then babies head was fully born. I put my hand on their head and felt so excited that they were just about here. A few seconds went by, I felt baby rotate inside me, they kicked their little legs and then they were born. It was 9:25pm

Matt grabbed baby and placed them on my chest. Baby let out a little cry and relaxed immediate on me. They were covered in so much vernix. And they had a full head of hair! Matt asked me if she was breathing and if I thought she was okay. She was breathing and super pink with great muscle tone. After a few minutes he asked if we could see what baby was. When I first looked down I thought I saw a penis, but it was their umbilical cord. Matt announced we had a little girl! We both said “ hi Hannah!”

Matt grabbed a towel and we snuggled in the pool for about 40 minutes. Her cord was shorter then I expected and I couldn’t bring her up to nurse. The water was getting cold so we decided to get out. I felt something coming out of me and at first I thought it was the placenta, but it was a fist sized clot. I could feel the placenta deep inside me so I was hoping it would come out soon. I passed her to Matt and slowly stood up. It was hard getting out of the pool but we managed. We turned on the shower and all got inside. Matt held her while I gently tugged on the cord hoping to help it along. After about 8 minutes my legs were just too tired to keep standing. We decided to cut the cord so we could get out and have her first latch.

We made our way to the bed and laid down. She latched right away and it was amazing. She was wide awake and so alert. It was so special laying there just taking each other in. I got up after a while and got back in the shower hoping to get the placenta out. Again it wasn’t happening and I was getting really tired. I kept trying to pee but wasn’t able to. So I got out and threw on a depends diaper. I got back in bed with Hannah while Matt started to clean up and empty the pool. I chugged a 24oz bottle of water, 12oz of Gatorade and a 12oz protein shake.

After everything was cleaned up it was close to midnight. We decided to just go to bed and take her measurements the next day. ( she ended up weighing 9lbs 1.4oz and was 20 inches long)  At 3am I got up to try and pee. There was so much pressure inside my vagina that I was starting to wonder if I had torn. I sat on the toilet and was finally able to pee. And out plopped my placenta. It felt amazing to have it out and the uncomfortable pressure was gone. I did tear a little bit but it has since healed up beautifully.

I labored for 21 hours on about 4 hours of sleep. When I was pregnant I always hoped I wouldn’t have a fast birth, I wanted to really experience each phase. I’m so thankful I had exactly what I wanted. Birth was amazing and intense and I would do it over and over again. I only felt pain twice during labor and felt like I worked through each contraction fairly effortlessly.

It still feels so surreal that she is here. This little person I waited so many years for.