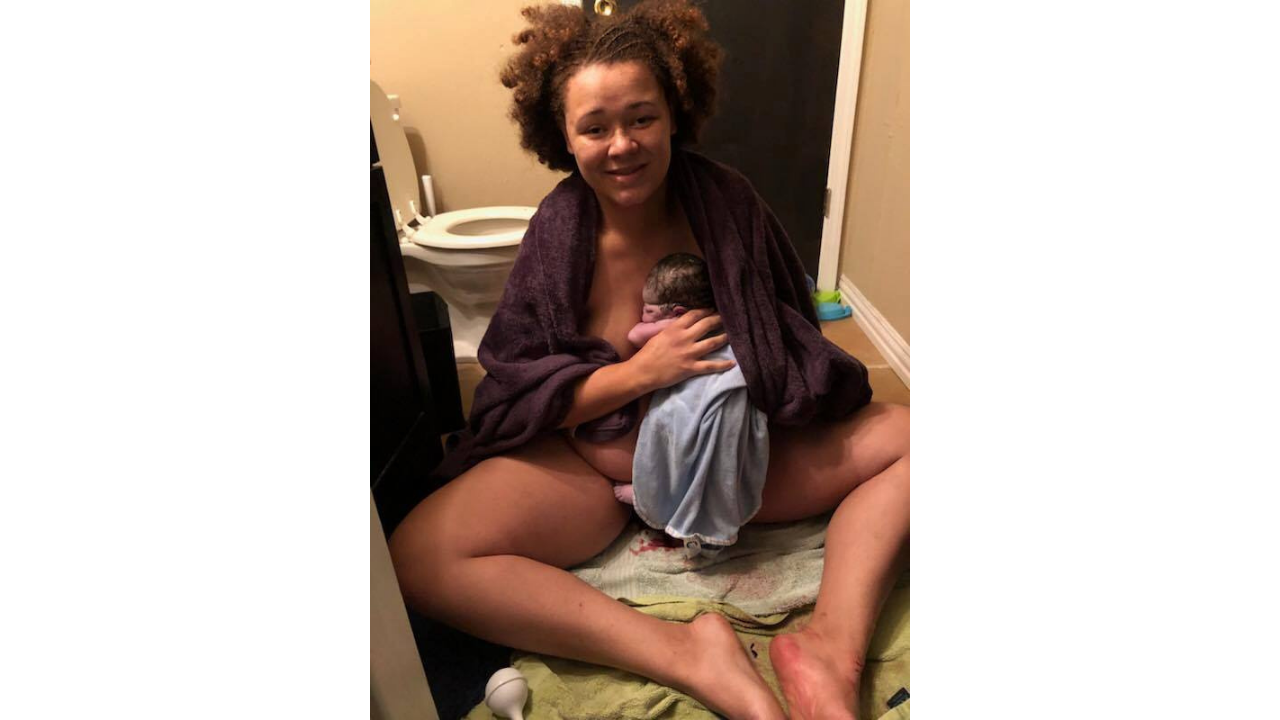 At 2:30 a.m. on August 8th I woke up to my toddler stirring next to me. I patted his butt and shushed him to try to keep him asleep. I did not want him to wake up because I knew that meant the rest of the night he’d be literally on top of me. We were at my parent’s house that night because our shower was being redone at home the previous day and they were supposed to come back the next morning to finish it. Luckily, he fell back asleep. I was awake though and of course needed a snack. I decided to go outside.

There was a storm coming and I just felt the need to be with nature. I sat out there in the quiet for awhile. I then starting talking to the baby. I read Brené Brown’s “Wholehearted Parenting Manifesto” to her. I told her I think I was finally ready to be a mom of two and that I would do my best as a mom. I told her I was sorry that I was in so much pain from her positioning and told her she could stay as long as she needed. I prayed to God for peace about finishing out this pregnancy and help to enjoy the end of it. I stayed outside a bit longer then went back in to go back to bed. At around 5am I got a contraction that felt different. It felt real. I was surprised by the feeling but went back to sleep. I felt about 5-7 more of those until I woke up at 8:30. When I woke up I had this intense desire to pack up and get home quickly.

My son woke up at 8:45 which is normally too early for him but that day, it was perfect timing. I texted my husband before I left the bedroom and told him “A baby is a brewing...” I came out with our stuff packed up and my mom asked if it was baby day. I told her I didn’t know but in my head I was pretty sure it was. She said my dad had asked earlier that day too before going to work which I found kind of funny since he didn’t know anything that had been going on. She asked if I wanted my son to stay with them for the day and I couldn’t decide. I wanted him to be at home for the birth but the way those contractions were, I wasn’t sure if I could handle him being there. Ultimately I decided to leave him and I’m glad I did. I texted my husband again and told him to come home at lunch. I drove home, stopping to get some crushed ice from Sonic. I had 3 contractions on the way home and regretted not taking up my mom’s offer to drive me home during each one. I got home about 10 and called my husband because he still hadn’t answered my texts.

He didn’t answer my call either. I texted him to come home then. He called me back about 15 min later and asked what was going on, if I was sure I was in labor, did I want him to come then or leave at lunch. His lunch is at 11 so I decided I’d be ok until he left at lunch. Time starts to get a little fuzzy here. During contractions I felt the need to be on all fours to relive the pain. I also thought Lilliana may be posterior and knew being on all fours would help her turn if she was in fact posterior. I tried laying in the bed but because of the severe sciatic nerve pain I’d been having, I couldn’t get up in time for the contractions which caused more pain. I got in the shower for a bit but it became too hot. I discovered the power of hip squeezes about this time and every time I’d have a contraction I’d yell/moan, “hips” at my husband to do them for me. I kept asking the time. I think I thought that knowing the time would somehow let me know how I was progressing. Around 12:30/1 I kept having a need to push sensation. I told my husband I think she’d come soon.

We have an extra bedroom in our house that I had set up to be where I thought I’d labor and birth at. I wound up in the half bathroom in our bedroom. After that need to push sensation kept coming I told my husband to grab the yoga mat setup I had made that was extra cushioned and to grab some towels and bring them to the bathroom. I got on all fours and although I knew they were still a couple minutes apart, it felt like the contractions were on top of each other. I could feel the baby descending. My husband at one point said something along the lines of I see something black in there. Internally I chuckled but externally I snapped that it was probably the baby’s hair. A couple minutes later my water broke and she began to crown. I was half crying/half pleading to him that I couldn’t do this anymore. Like there was any turning back at that point. He told me to take a break, which I wanted to do but my body was pushing the baby out and there was no stopping it.

Her head came out then her body all in what seemed like 30 seconds total. My husband had caught her and I flipped around to sit down and grab her. I saw she was a she and began to cry as I told him it’s a girl! It was 2:58 p.m. She was very gurgley. I tried to suck stuff out with my mouth but nothing was coming. I held her head lowered to try to drain her, and again nothing. I decided to go ahead and syringe out stuff with a bulb. After about 20 min I stood up with her to get cleaned off. Her umbilical chord was short. I could only hold her to my chest if I was hunched over. I was scared the placenta would fall out and snap. With the birth of my son, it literally just slid out of my body. I didn’t push, no one pulled, or anything, just slid on out. I had my husband hold the bowl under my legs just in case but he got tired.

About 15 min later I felt the need to push and he put the bowl back and out came the placenta. I felt I was bleeding too much at this point. I’m not sure if I really was or if I was just anxious. Regardless, I took some Shephard’s Purse. I handed her off to my husband to get a quick rinse off in the shower because by this point I had dried blood on me. After that we got in the bed and cuddled for awhile. I had bought period parties for post partum but they were not absorbent enough for the immediate stuff. I had a hush of blood and it got all over the bed. I got up to get clean and change and felt extremely dizzy/lightheaded. I told my husband to bring me a piece of the placenta but taking one look at it, I knew I couldn’t put it in my mouth. He went back and made me a real quick smoothie with it. I felt better physically after taking it but still wondered if I was bleeding too much. We weighed her and measured her mostly for fun and to compare to big brother. She was 8lbs 2ounces and 18.5 inches long. Much smaller than my son who was born at 9lbs 2oz 21.75 inches long.

She seemed cold so I decided to temp her. She was 95 degrees. We did skin to skin but it took her about 14 hours to get up to 98.6 degrees. I didn’t want to go seek help though because I knew they would just take her, run unnecessary tests, and put her in a warming box where she couldn’t be help.

I’m glad I just waited. This was a crazy experience that I never even imagined was a possibility.