Birthing Outside in Power & Instinct 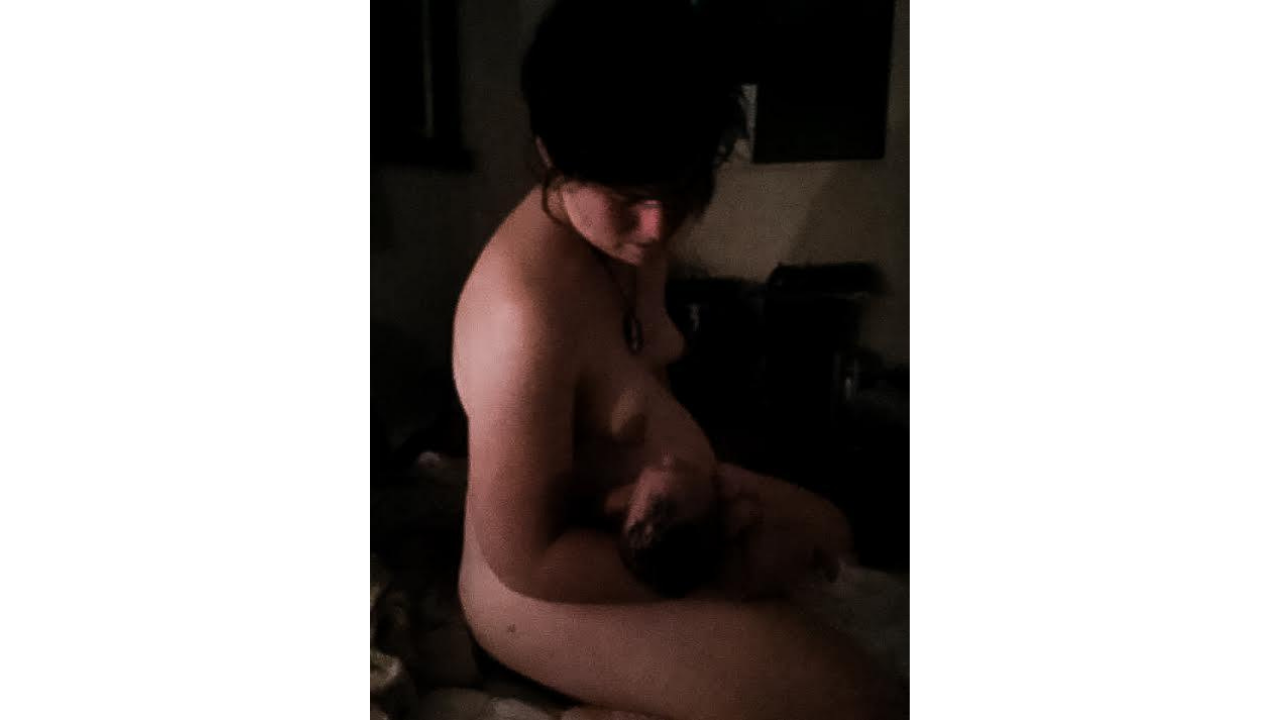 When I became pregnant just before the total solar eclipse of 2017, I knew pretty much right away and never thought to take a pregnancy test. I felt different, wasn't bleeding, and had to pee way too often. That was enough for me. Those early months I just remained open to come what may. About 3-4 months in as my belly noticeably grew, it felt more and more real to me. We were living near Mount Shasta in a sort of tipi and yurt village with three families, and two of the women had freebirthed their own daughters. They were a big inspiration to me, yet for a while I still seriously considered hiring a midwife. Rather than pursue that route, I signed my partner and I up for a small home birth class taught by a local doula. I learned so much in the class and by reading as much material as I could get my hands on and listening to birth stories podcasts. By mid-pregnancy, I felt confident in my decision to bypass any medical assistance and just freebirth. My partner was on board from the beginning; his sentiment being that reproduction is one thing that humans remember how to do. Basically, he fully trusted me and my body and our baby.

My pregnancy progressed without any hiccups. I continued to read and learn and indulge my new fascination with birth and the growing of humans. I am a minimalist by nature. Someone who works under the table, forgets to re-register my car and do all that official stuff. Doctor's appointments just aren't really my style. To me, non-medicalized pregnancy just felt normal. I was living amongst two amazing women who had normalized it for me, and truly I was blessed to have avoided critique from really anyone. My parents never questioned me about not seeking medical care. My friends didn't think it strange either. It was all so normal, so why complicate this natural process?

My 5th month our little village ended up dispersing due to land owner issues and my partner and I were on our own. We spent late Winter/early Spring searching for the right place to birth our family. It was a challenging few months crammed together in a tiny bus and we grew in our communication and patience. I had to feel out all the options for this birth and entertained the idea of birthing in solitude out in the woods. Turns out that wasn't the right way for me, and by the beginning of April we pack everything into our car, including goats, chickens, dogs and cat, and headed back to California be amongst the support of my friends. That decision became so clear to me when I began considering the importance of postpartum care. So we rented a perfect little cabin in the redwoods and settled in.

Somewhere around 34 weeks I suddenly realized my baby was a girl. It was about the same time I started really feeling bonded with her. I felt so grateful to keep things intimate, with no one else touching my belly but me and Andrew. When we got back to California I did have a few fun sessions with my dear friend Nan who palpated me to feel position. That was really the only outside confirmation I desired. Nan is a midwife from back in the day; she helped revive midwifery back in the 70's and 80's when it was still illegal in California. Most people assumed she would attend the birth, and some even asked if she was going to "deliver my baby", but I didn't really want her to attend the birth unless there was an emergency. And it turns out she came down with a serious fever right as I went into labor. Nan was integral to my postpartum care - organizing meal trains, checking my healing, and bringing prayer and ceremony for me and baby. Before the birth she gave me a Blessingway ceremony, which was a significant event in this rite of passage for me leaving maidenhood. Beneath the plum tree in the garden, my wise women friends gathered to bless me up and fortify my courage to birth as I choose. In this exact sacred spot Andrew pitched our little tipi and set up the birth pool inside. He got everything ready about two weeks before the birth and I gathered rose petals and lavender each day for the altar. I rested and walked and tried to remain in the ceremony of this transitional time.

May was a special time for us - reminiscing on our meeting each other one year before, Mother's Day, preparing for Andrew's birthday… The day before the new moon in May I went to my best friend's house to bake him a cake in advance and soak once more in her tub. I picked roses and honeysuckle and brought the intoxicating fragrance of flowers and cake back to our cabin. They lulled me into a delicious sleep that was suddenly interrupted around 1am by the first waves of tightening cramps. I knew it was beginning, and also that it could take days, so my goal was to get back to sleep. But the sensation of needing to poo just kept me awake. I went outside to our bucket with no success, so decided to bring a small pot inside and try there. Unfortunately this pot was flimsy and it crumpled beneath me, landing me with a thud on the floor. Andrew woke up with a start - he literally leapt up off the floor - and that's when I told him what was going on, that labor was beginning. He held me through the rest of the night and I did manage to get some sleep. In the morning the waves continued, maybe 15-20 minutes apart. I pretty much just rested in bed that day in preparation for what was to come. We did take a goat walk together and I did a few chores. We made love and after a bit of my mucous plug came out. I made sure to frost Andrew's cake and decorate it with rose petals. And I let a few of my friends and mother know. In the evening I made dinner and the waves started coming much stronger. I had to kneel over this wooden box to ride them out, but they were still spaced out. I asked Andrew to lay in bed with me. Then Maya came and lit the wood stove fire. The sun had set and it was getting more intense. That sweet space between waves grew shorter. Anne Louise showed up, bringing a chicken dinner for everyone. I considered changing all the plans and staying inside with the warm fire, which sent everyone into a tizzy moving things around. I didn't like that - all the commotion and talking, asking me questions; and I didn't like that Andrew had left me now to rearrange and prepare. So I just went outside to pee, saw the starry sky and said, "Forget it. I'm staying outside." It was a beautiful night and I felt so safe and at home in this garden. Maya made a campfire and Anne fed everyone while I kneeled against a bench and went inward. I felt a bit annoyed anytime someone would speak to me, but I also felt very grateful to have my companions with me. Maya squeezed my hips and it felt so good I pretty much asked her to do it each time a wave peaked. I spent the next few hours slowly moving around the garden, though it feels like mere moments passed. I kneeled before the fire for a while. Anne fed me sweet potato and gave me ginger rose tea. She heated water on the fire and filled the pool. Around 11:30 I was ready to submerge my body into those luscious waters. I felt so much comfort in the water! It was just right for me. I was held in the comfort of our dark tipi and had a table set up next to the pool with candles and crystals and roses. I put roses and lavender into the water and continued to move around with each wave. I worked with the rope hanging from the crown, hanging my weight from it. That was the most indescribably overpowering feeling - my baby moving down, descending into the world.

I slept next to my daughter for a few hours that morning and awoke feeling so psychedelic that this incredible, perfect being was here with me now. Just gushing love and amazement and gratitude for the opportunity to bond with her in a perfect way. This birth showed me what I am capable of and made a mother out of me. At no point during the labor or birth did I ever fear that something would go wrong with my baby. My trust overpowered any chance of doubt, and I am so glad I birthed freely in this way that was so perfect for me and my new family.