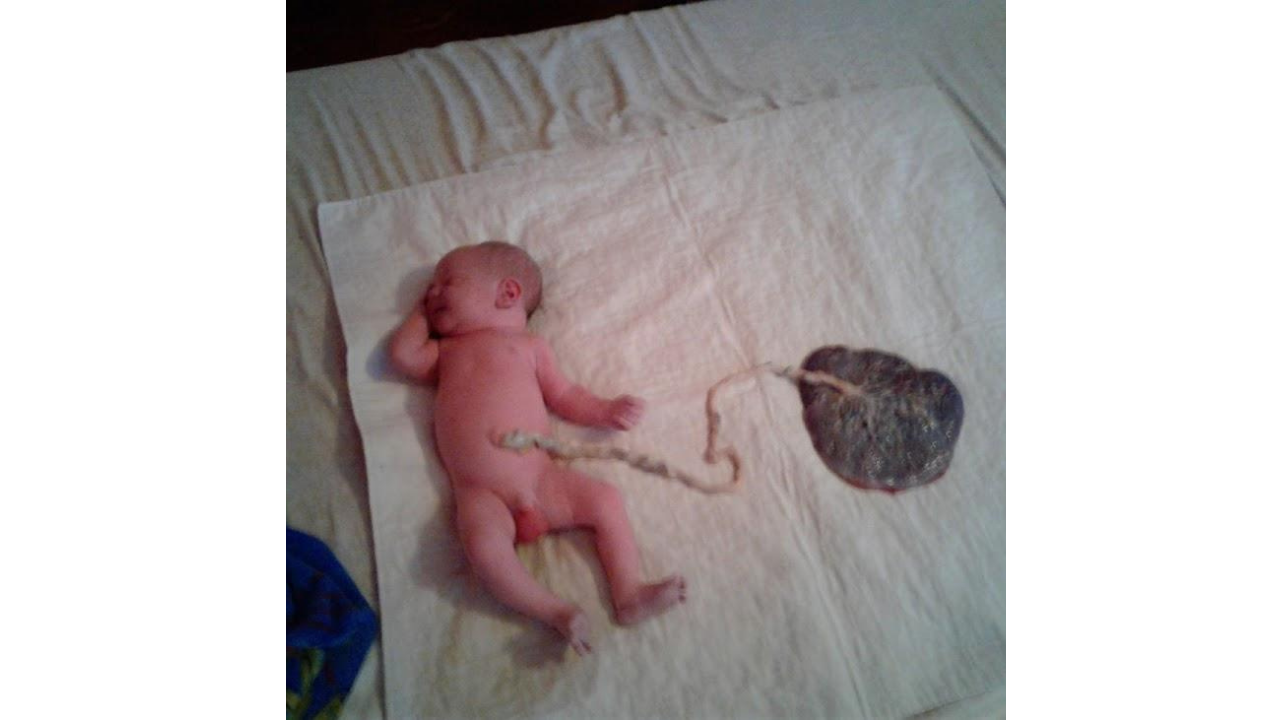 Please note* The midwife mentioned in this birth story is the birthing woman's mother, and so it was a relaxed dynamic as family vs a client/midwife dynamic.*

This is the story of my fifth homebirth.  With four successful homebirths under my belt, a strong belief in the birth process and my body's ability, my partner and i decided to try for an unassisted birth.  I love the intimate idea of free birthing and with this being my fifth, why not go for it. I made my midwife (who is also my mom) aware of my plan and also that I would call her if i changed my mind.  I planned on letting her know when I was in labor so she would be available if necessary.

I lost my mucus plug on Sunday while at the science museum with my four other children. I was excited at the prospect of labor starting soon.  I informed my man when I returned home. Evening turned to night; night into morning and still nothing. In the morning, I told my man to go to work but to keep his phone nearby. In the afternoon when he texted to check in on me, I was doing an online workout video, so nothing was happening. Around 4:30pm my contractions started coming about every ten minutes.  At 5:00pm I had to pick up my oldest child at basketball practice,while contractions remained steady but manageable in the car.

I got home, made dinner, cleaned up dinner and went about my evening. I tried to rest, to preserve my energy for labor. Everyone went to sleep as usual and I continued to labor. I went as long as I could alone, but woke my man up around 1:00am to be with me.(I actually woke him up to help me out of the bath.)  The hours that followed were a blur. Contraction, changing positions, In and out of the shower, on the birth ball, off the birth ball. At some point I must have been getting loud because two of my children woke up and remained with us from then on. They say your mind is so powerful it can shut off labor. (We are mammals after all, who turn off labor if danger is suspected.) Well mine slowed significantly to mother. My awoken children wanted me out of the shower so they could take a bath, then for me to lay with them to go back to sleep, this all while naked and laboring.

My contractions continued but did not progress after everyone went back to sleep around 4:00am. My previous births have gradually shortened in duration from each child to the next. My first birth being 12 hours start to finish and my fourth only 6. So naturally I expected this birth to follow suit. But it just proves birth is unpredictable and out of our control. Every pregnancy, birth, and baby are different and each a journey of their own . All we can do is allow it to unfold. So back to this birth. At 6:00am I was bleeding with every contraction and starting to feel discouraged that labor wasn’t progressing faster.  I thought “Why wasn’t the baby here already!!” I texted my midwife at 6:00 am telling her what was happening She asked to come over and see the blood. After arriving and assessing the blood she confirmed everything was normal and it was just some bloody show. Then she asked if I wanted her to leave or just stay downstairs, since she knew I was hoping for an unassisted. My response was kind of like “whatever”, “I don’t care”, ”just stay and get this show on the road and you get the baby out.” (Labor brain is pretty crazy. Not the most rational of thoughts.)

All my kids stayed home from school that day, but went next door to my mothers.  I originally planned for them to all be there when the baby was being born. My labor continued throughout the day, but I wouldn’t say progressed. My midwife/mother had me lay down so she could check the baby. This was by far the most painful position to be in. She didn’t tell me at the time, but the baby still hadn’t descended. I could still feel and see the kicks throughout labor, which I had never experienced before. I remember texting my sister mid-day, who was supposed to be at the birth, that I was dying. My baby was posterior and this was the first time experiencing back labor. “Holy shit!” She was nannying and sent her love, letting me know she’d be over asap.  I thought “no I’ll have this baby before she even gets here.

Four hours from the text, and nope I was still in labor. At dark another doula I am close with came over with her goodie bag of homeopathics. She mixed me up concoctions I was willingly downing. After midnight my contractions were coming closer together and stronger. I felt pressure and was assured I was opening. I was working so hard but still nothing. I was told I needed to rest. I was losing energy and it would be hard for me to go on at that pace. I finally layed down at 2:00am Wednesday morning.

Surprisingly everything slowed and I was able to sleep. (Aren’t our bodies amazing. They know what mother and baby need and then grant it.)  My contractions continued, but much lighter now. I would feel them, but they would quickly pass, and I would fall right back to sleep. I woke up around 6:00 am to a quiet darkness. It felt like a dream. Like I was watching it from above. I stood up completely naked and looked down at my still pregnant belly. I was still pregnant! My man and our 4 year old were asleep at the end of the bed. I walked through my dark house. My sister was sleeping in my oldest sons bed. My midwife was asleep downstairs on the couch. I felt so heavy, both physically and emotionally. I laid down. When it was time for a new day to start, I sent the kids to school. Whatever, I was never having this baby.

My midwife also left to take her kids to school first telling me to rest and refuel. I might have another whole day of labor ahead. “ A whole day!! Never” I wouldn’t survive.  I was already telling myself if this baby wasn’t here by midnight, I was going in for a cesarian. Not because I was worried about anything but because I was so exhausted, I couldn’t fathom going into day three. ( In retrospect I wouldn’t of done that. Again labor brain, plus I can’t stand the thought of mother baby separation. This would definitely happened with a walk up c-section) So now it was just me and my man again. I proceeded to cry and rant. I already did everything I could do. I worked so hard. It had already been so long. “I felt so close yesterday, and how could I start all over again?” I ate breakfast and settled in for a marathon Broad City season 3 binge.  It was nice. I laughed, and was able to relax.  Around Noon (After my emotional release and the rest)  my contractions started getting stronger and closer again.  Now my midwife, two of my sisters,(one photographing and one midwife in training), my man, and yet a different doula friend, that is skilled in rebozo skills were all there to support me she went to work. “Let’s move this still posterior baby” were all there supporting me.  Around 2:00pm they suggested the birth pool. I wasn’t planning a water birth, but had it available for resting and pain relief. I thought “Whatever I’ll try anything.”

One hour later and everyone was leaving. Some, going to lunch, others picking up school kids, etc. This left just me and my amazing doula. (A side note the rebozo during labor is a God send,as is counter pressure).  My contractions were on top of each other and strong. I could sense my doula didn’t want to deliver this baby, but I could care less at this point. Me and her alone, whatever. Get this baby out! Everyone got back, I was in and out of the birth pool. I tried doing some different leg lift exercises to get the baby into position. I once heard someone say that when a posterior babies shift you can almost hear them “Plop” into position. That's exactly what happened.  I lifted my left leg and when I set it down I felt/heard the “Plop”. I was asked to lift my right leg but I couldn’t as an intense contraction came on. I leaned over the bed and “whosh.”

My water broke. I knew the baby was coming. I wanted to squat. I wanted to move to the end of the bed, but it seemed miles away. Between contractions I was able to get to the end of the bed and into a supported squat with my man behind me. This is how I delivered four out of five of my babies, and began to push.I had to push with all my might. When the head was out, my man said he could see it in the mirror.  With the next contraction I felt his body slide out. It was the most amazing release ever. He was immediately placed on my chest. Twenty minutes after my water broke my baby was here! 4:43 pm. Almost exactly 48 hours after contractions began. 8lbs10oz, and no tear! The release is like no other. And a boy! I was shocked! My fourth son. I thought for sure it was a girl.(Maybe next time ;) The high you experience after natural childbirth is like no other, and it's designed that way so we keep having babies. It's the most euphoric feeling I’ve ever experienced time and time again. I can’t really put it into words, but it's pure bliss.

Childbirth is empowering, spiritual, and transformative, if you allow it to be.  This birth taught me so much. Though I still like the idea of an unassisted childbirth, I realized how much I thrive on female energy, and the difference in the type of support they can provide.  It reminded me to trust myself, my body, and the process. To surrender. My body had to rest and reset, and I had to give it the time it needed to do that. Being tucked into my own bed with my newborn is the best feeling.  It's such a gentle and peaceful way to start life. In your home surrounded by love. Breastfeeding on demand, skin to skin, delayed cord clamping all those wonderful additions to a gentle start. I couldn’t be happier with the way my birth played out and wouldn’t have it any other way.  Though I am already getting ideas on how my next birth plan will differ…