Birthing in Power After a Traumatic Birth 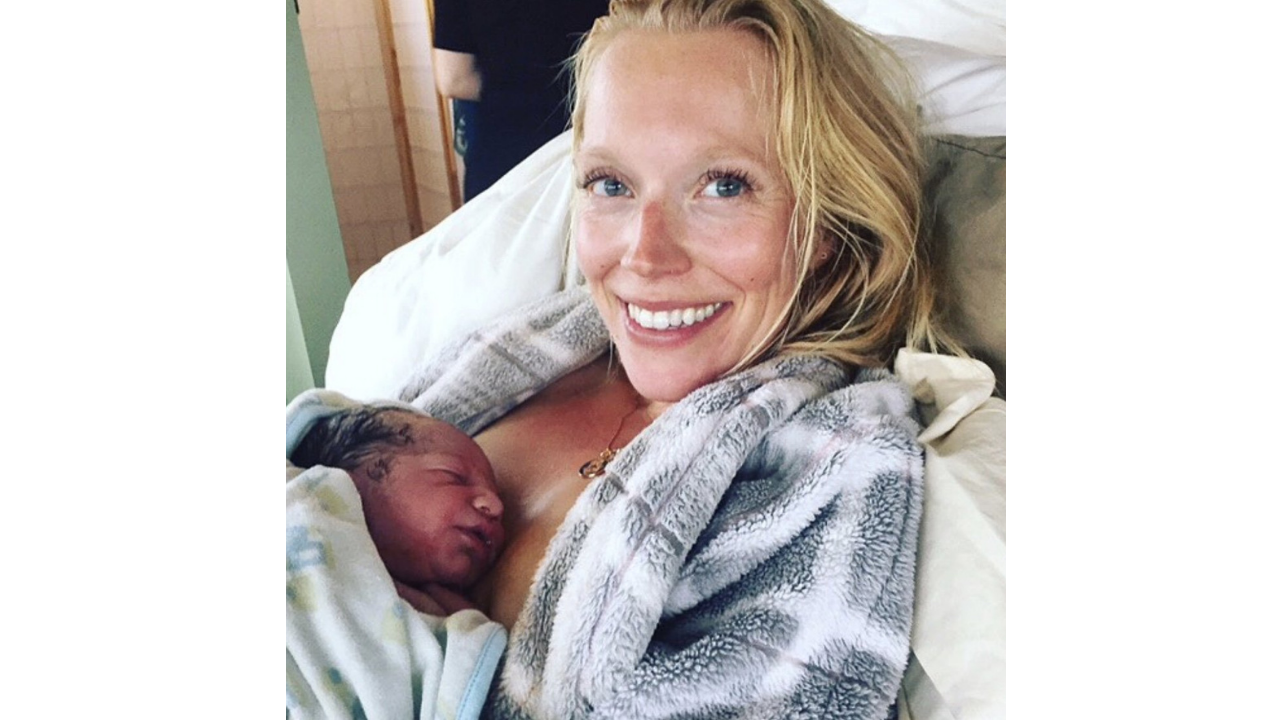 My first son was cut out of my body, while I was chemically paralyzed, naked, and screaming.

That birth left me shattered.

Of course, I was deeply grateful for, and in love with, my newborn son. At the same time, I was deeply angry, confused, and in pain about how he was born. And it is the strangest thing to have to reconcile those emotions. Love and shock. Joy and nightmares. Pain and beauty.  The flashbacks would wake up at night as much as the nighttime feedings.

In retrospect, I recognize that I suffered from PTSD for about the first 12 months of his life. On top of my own trauma, everything that can be hard about the newborn phase was hard for us. Sleeping (I didn’t), breastfeeding (months of pain and mastitis), healing from major surgery, and just adjusting to being a mom. There were some early concerns about his development, too, and a big worry for me was that his traumatic delivery had damaged him in some way. It was a very hard year.

Around his second birthday, I found out I was expecting again. It was another absolute shock and I cried my eyes out when I came out of the bathroom and told my partner.

It wasn’t that I did not have love to give another child, or didn’t want this child. I was so, so scared to face birth again. I was not ready.

I also knew that, as a women with a prior surgical delivery, I would be treated as a higher risk-patient, and that my delivery options would be greatly restricted. State laws on VBAC (Vaginal Birth After Caesarean) deliveries vary, but in the state where I live, about 75% of women who have had a c-section will go on to have a second. Women who have had a prior c-section are not allowed to birth in a birth center. Some hospitals are “tolerant” of it, but many are not.

The legality for midwives to attend a VBAC at home (an HBAC - Homebirth After Caesarean), as I understood it, exists in a bit of a grey zone. It is outside of the scope of a licensed midwife to do it, but some will, and do not advertise it. They rightly believe that it is an important human rights issue to support women who want to birth at home whom the system deems too “high risk.”

I knew one thing. Unless there was absolutely no other option, this baby would be born at home. I knew unequivocally that if I had a hospital birth, I’d be having another c-section. Going through that again was my worst nightmare.

One morning, about 8 weeks into the pregnancy, I was pondering this issue of finding a midwife and feeling quite alone, when I had a sudden, relevant memory. I was in a prenatal yoga class, three years prior, and the instructor shared, in a somehow very graceful way to all of us very-pregnant ladies, that she had had an emergency c-section with her first baby, and a home birth with her second. At the time I heard her tell it, I remembered thinking, wow, what an incredibly strong woman. What courage it must have taken to do that. Now her story had real relevance to me. I tracked down her email address, which she had generously shared with us in class, and emailed her, introducing myself and explaining my situation, I asked if she could give me any guidance as to how to find a someone to attend my birth. To my surprise, she remembered me from that class several years ago, and told me to immediately get in touch with ICAN. Turns out, my local chapter maintains a list of traditional birth attendants that were willing to see VBAC clients.

I followed her advice. I got my hands on that (extremely short) list, and I called every single midwife on it. Only one was accepting clients for the month I was due. So I had one option. I took it.

I could exhale a bit after finding a birth attendant who trusted birth, but this part of my story is where my real work began. It was inner work. I realized that, this birth could be really redemptive and healing. That was exciting, and I realized too that if that was to happen, it was my job to fully take responsibility for this pregnancy, this birth, and for my own healing. I also knew I had to be psychologically okay if a repeat c-section did happen. I could not fall apart, I would have two small children, and a partner, who needed me to be okay. There was no out of this. I had to fully face how scared I was, accept it, and transform it. This was the hardest inner work of my life thus far, and I didn’t do it perfectly. Somedays I felt overcome by fear and I just cried. Somedays when I felt that cold fear creeping in, I journaled about it, I prayed about it, and meditated, and I felt better.

During this pregnancy my yoga practice was a non-negotiable part of my daily life. Weekdays I got up early, before anyone else was up, and attended a 6:30 AM practice. I did this all the way up until the day I went into labor. I cannot overstate how much my yoga practice saved me. Actually, it continues to save me day after day.

Physically, I once again had an easy, uneventful pregnancy. At every midwife visit, I asked about my baby’s size. My biggest concern was that I would have another very large baby. There was nothing about my diet, my weight gain, prenatal tests, or genetic history, that explained why I had had a baby that big the first time. I had followed an extremely clean diet, and exercised every day the first time, so in a way, I felt as if I had no real control over the size of this baby.

Everything indicated that this baby was smaller, though. And, this being my second time, I could feel that he was, indeed, smaller.

I will never forget leaving my last prenatal visit with my midwife. I walked out of the doors, onto the street, and felt an otherworldly chill down my spine. I had a moment of profound peace and knowing that came to from what I can only describe as God. I knew, I mean, KNEW, I was going to birth this baby, and it was going to be really good. I knew it like I know my own name. It was an amazing experience.

And it was that very night that I woke up at 2 am, to very strong contractions, very close together. They jolted me awake and caused me to shoot out of bed. There was no easing into this labor this time, it started hard and fast, right away.

I wanted to let my partner sleep as long as possible. I made it about an hour before waking him. “Brad, I am in labor. It is happening really fast.” Those words will make your partner wake up real fast! And it was only one more hour before I called my birth attendants. That was at four AM, and my doula and midwife were there by five.

This labor was so different from the first one in so many ways. Interestingly, this time being in the water, which was the only way I could cope before, did not work for me at all. I felt too ungrounded. I labored in my bed room on all fours, wrapped in my bathrobe. Sometimes on my knees, holding onto the side of the bed. And once we tried a birth stool, but the pressure in this position was so overwhelming I couldn’t tolerate it for long. They told me my son’s head was “right there,” that I could reach down and feel it. I did not believe them. There were three hours, I was told, of “pushing” but that is not what I experienced. I never pushed, my body just pushed and I was along for the ride.

The end of this whirlwind labor ended with me in a semi-reclined position in my bed. I love that it was probably the exact same place he was conceived. In one contraction, his entire body shot out of me, right into my arms and up to my chest. This time, no one touched him before me. No one took him away from me. No one hurt either of us. There were no drugs in my system this time, I was fully alert and fully present in for my child's birth.

He was stunningly beautiful, wide-eyed, and didn’t cry. I wept with joy and disbelief. He shat all over my stomach. I had never been higher in my life. If you looked at my face in those minutes after birth, you would have thought that I had just spent the last 6 hours dancing all night, on boatloads of Ecstasy. Or that I had just had ten orgasms during the greatest night of marathon sex of my life.

I would go through pregnancy and childbirth again and again for that moment. In a deep way, it has never left me.

With the perspective of time, I realize that, much the same way I cannot blame myself for the traumatic way my first child was born, I cannot congratulate myself too much about having a subsequent, beautiful birth experience. I had the courage to try, and the strength to do it, and I am proud of that, but this birth experience was a gift to me from my son. He’s really the one who partnered with me to make it happen. And everything  about his presence in my life for the past two years has been incredibly healing.

I’ll never know for sure if my first son, the 12-pound baby, could have been born at home, without surgery. It is certainly possible, other women have done it. As I have reflected on it over time, I’ve come to the conclusion that no matter how he was born, it was going to be difficult and traumatic to my body in one way or another. I believe that that is just part of our shared karma. I don’t use that word with the mistakenly punitive connotation it carries in the West, I simply mean that we have probably had a challenging time coming together many times in many lifetimes.

And the great gift that my first son gave me a deep compassion for all other mothers, especially those who have been through birth trauma. Had both births been as lovely as the second one, I would probably more dogmatic in my views. Instead I am awed by all birth stories, and have a deep respect for all birthing women no matter how their birth went down. He really did crack me open and let the light in, like Rumi says.